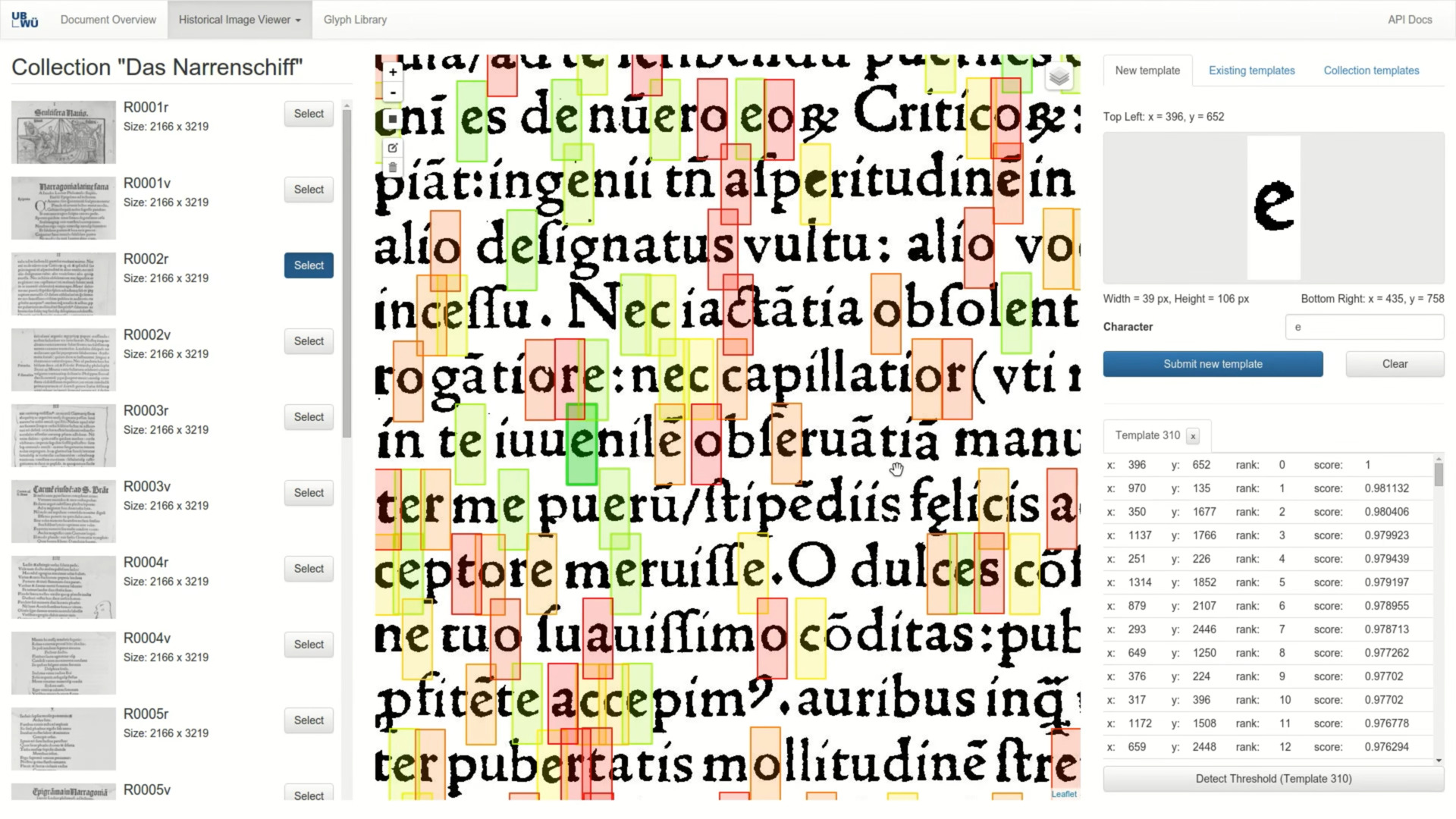 NOTE: The software is currently in an early version that is meant for testing. In particular, there are known problems when using Firefox. We recommend using Chrome/Chromium when interacting with Glyph Miner.

While off-the-shelf OCR systems work well on many modern documents, they need to be specifically “trained” to achive good results on particular early prints. Employing efficient user interactions, Glyph Miner helps in this process by rapidly locating sample occurrences of glyphs (which can be used for the training).

Glyph Miner and the algorithmic ideas behind it are currently being developed by Benedikt Budig and Thomas van Dijk, University of Würzburg. The project is supported by Würzburg University Library and the Kallimachos project.

Quick Start: Run it with Docker

Glyph Miner is available through Docker for easy deployment and testing. Make sure you have installed a recent version of Docker.

BEWARE: In this default configuration, any changes you make to the system (like adding documents, mining glyphs, etc.) are not persistant and will be lost once the container is stopped.

This is the fastest way to get the system running on your machine. Just pull our official build from Docker Hub:

That’s it! The Glyph Miner interface is now available at http://localhost:8080.

First, check out the repository and build the Glyph Miner Docker image:

You can run a new container based on this image using:

Once the container has been spun up, the Glyph Miner interface is available at http://localhost:8080.

The Glyph Miner software is preferably installed on a Linux machine. This guide shows how to install the software on Ubuntu 14.04 LTS; for other distributions, the process is similar.

First, make sure you have the following packages installed on your system:

Setting up nginx and uWSGI

You will need a recent version of uwsgi. Get the newest version through PIP: sudo pip install uwsgi

Let nginx know that calls to the API will be handled by the python server by adding the following lines in /etc/nginx/sites-enabled/default:

Do not forget to restart nginx in order to make your changes work: sudo service nginx restart

To get the latest version of the software, clone the git repository: git clone https://github.com/benedikt-budig/glyph-miner.git

Next, you need to compile the C++ library that handles the template matching:

Setting up the database

Glyph Miner uses a MySQL database to store its data. Create a new database and user glyphminer for Glyph Miner:

Import the database structure into the new database:

You can configure the credentials that Glyph Miner will use in server/server.py, line 49.

You can start the python server using uwsgi using the following command:

Thomas C. van Dijk is supported by the German Research Foundation (DFG), grant number Di 2161/2-1 in the context of the priority programme Volunteered Geographic Information. We thank to Dr. Hans-Günter Schmidt and his team of the Würzburg University Library for their generous support.

This program is free software: you can redistribute it and/or modify it under the terms of the GNU General Public License as published by the Free Software Foundation, either version 3 of the License, or (at your option) any later version.

This program is distributed in the hope that it will be useful, but WITHOUT ANY WARRANTY; without even the implied warranty of MERCHANTABILITY or FITNESS FOR A PARTICULAR PURPOSE. See the GNU General Public License for more details.

You should have received a copy of the GNU General Public License along with this program. If not, see http://www.gnu.org/licenses/.

The LodePNG library used in this software is Copyright (C) 2005-2014 Lode Vandevenne.